Faul's Offspring (and his Actual Wife)

Singer/Songwriter,Phoney of the HIGHEST caliber.

Faul is immortal unlike Paul.

Paul died in a car crash.

Brown
Paul McCartney was a singer/songwriter and the bass player of The Beatles, until that fateful car crash... It's said there was no body at the scene because it was just so gruesome, the only person there was Billy Campbell Shears.. Better known as Faul. Faul McCartney may have made better songs and more songs than Paul but he's still not real y 'know?

Faul McCartney is a man of slightly above average height, the same height as Paul, they have the same eye color and hair color too, even the same features as Paul! Like not even a miniscule difference! Whoops wasn't supposed to say that part, I'm gonna get kicked out of FaulCon 2020 now.

Paul McCartney did some stuff earlier in his life, and we'll use his events too because Faul consumed his life in a vorelike manner you see. Anyways Paul did some stuff here and there, but what really matters is when he joined small time indie rock band, The Beatles.

Paul made some good songs for a while here and there but everything changed when The Car Crash happened.. On some unknown date in like 1966, Paul McCartney lost a bet with Ringo Star. The bet detailed whoever would flip a coin and it would land on heads would have to drive as fast as they could into a wall, like 120 miles per hour in the middle of England. Clearly this did NOT work and Paul instantly died.

After Faul came into the mix, things changed for The Beatles... They made some crazier albums that were better and all but you could tell that things behind the scenes were different! John Lennon said in an interview in 1967 and I quote: "Paul Died in that stupid shitty bet Ringo and Him made, this Faul guy is an actual freak. Like what was he thinking when he said "Oi Jahn we gotta make Sgt. Pepper, he's Real." Like come on! Anyways Paul died put this in your tablets."

Eventually The Beatles broke up.

Faul has the ability to fool the hearts of the masses, to control them like a puppet on a string.

Faul with his official Pokemon, Dragonite 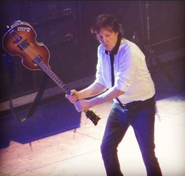 Faul about to kill somebody live on stage. 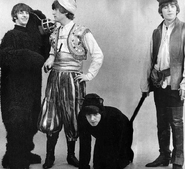 I don't even know how to describe this... This was Paul...
Community content is available under CC-BY-SA unless otherwise noted.
Advertisement